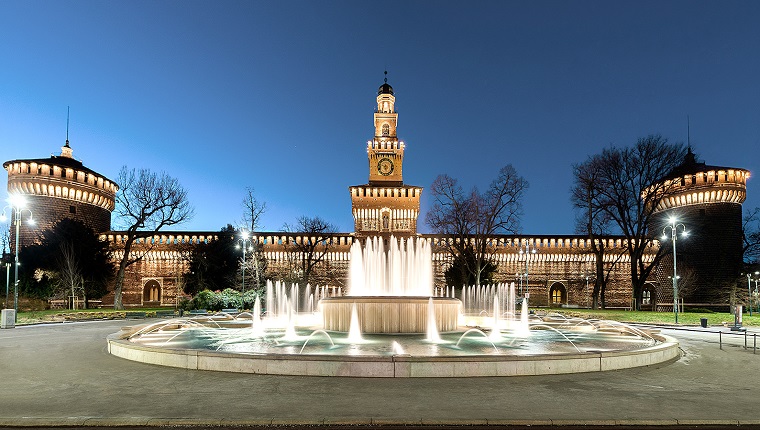 Update information to visit one of the most important attractions of Milan, the Milan Sforza Castle

The Sforza Castle is a fortification located in Milan, just outside the historic center of the city. It was built in the fifteenth century by Francesco Sforza, who had recently become Duke of Milan, on the remains of a previous medieval fortification dating back to the 14th century known as Porta Giovia Castle. In the same area where the Castle of Porta Giovia stood, in Roman times, there was the homonymous Castrum Portae Jovis, one of the four defensive castles of Roman Mediolanum (Milan). Greatly transformed and modified over the centuries, the Sforza Castle was, between the sixteenth and seventeenth centuries, one of the main military citadels of Europe. Finally, it was the protagonist of a historical-style restoration carried out by Luca Beltrami between 1890 and 1905. The Sforza Castle today is hosts some cultural institutions and important museums, such as the Castle Picture Gallery, the museum of prehistory, the Egyptian museum, the museum of musical instruments and many others. It is one of the largest castles in Europe and one of the main symbols of Milan and its history.

WHAT NOT TO LOSE IN YOUR VISIT TO SFORZA CASTLE MILAN

HOW TO REACH SFORZA CASTLE MILAN

The Sforza Castle, located in Piazza Castello, a short distance from the historic center of the city of Milan can be reached by:

Remember! To access  Milan Public Transport network, remember to buy the ticket that best suits your need, you can find all the tickets at your disposal clicking here

Milan Travel Card: It is possible to purchase the Milan Travel Card to have free access to public transportation, and discounts in many museums and attraction in Milan, at the price of 10,50 € (for 24h), 17 € (for 48h) and 19 € (for 72h), click here for more information about.